The two most common methods used to trigger a thermal shutoff, eliciting a failure position in pneumatically operated Emergency Shut Down and Emergency Isolation Valves are: (1) Fusible Plugs, and (2) Plastic Tubing. Both of these techniques have been used in emergency shutdown systems for years in refining, chemical, petrochemical, pulp and paper, flavors and fragrances, semi-conductor and pharmaceutical processes. A third technology based on memory shape alloys used successfully in space and aviation is increasingly replacing fusible plugs and plastic tubing based thermal shutdown systems.

Excessive heat from a fire causes the plastic tubing to soften, melt, and rupture. Once ruptured, air can no longer reach the actuator. When the air exhausts from the pneumatic actuator, the spring force closes the valve and stops the media flow. Although widely used, it presents three negatives:

To avoid these issues, instrument engineers now provide greater safety and system reliability with a FireChek, which uses shape memory alloy to trigger the emergency shutdown. The memory shape alloy element senses the ambient temperature and, through a phase induction change, rapidly produces the force and motion to operate. The element is 100% reliable because the shape memory effect is intrinsic to the alloy. Shape memory alloys have performed successfully for years in military, aerospace, industrial and consumer product applications. The FireChek is superior to the aforementioned approaches for the following four reasons:

U.S. refineries are discovering FireCheks on ESD (Emergency Shut Down) valves. In the following photo, the refinery is using the FireChek on their ESD valves on fuel gas lines to their burners. 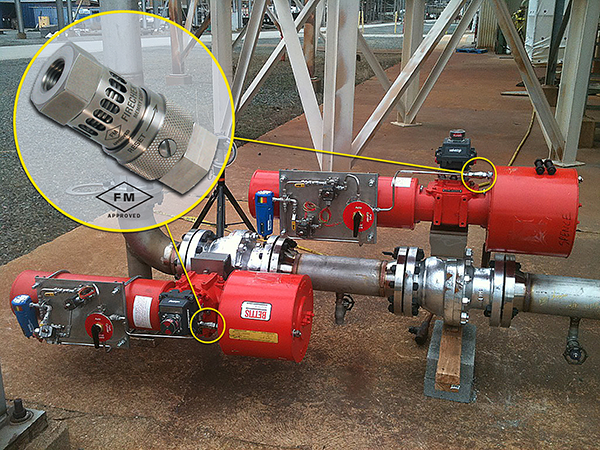 The accompanying photo of the FireChek installation demonstrates the simplicity of the system design.

Locations for ESD’s and EIV valves in Refinery Production Facilities (Hazard Zones) include:

For applications with high Cv requirements, Assured Automation is introducing a memory shape alloy based shutoff to meet the requirements of large actuators used in refineries. In addition, a field retrofit kit will be available for converting existing pneumatic actuators in the field.

While the depicted ESD/EIV valves above are in use in a refinery within a hazard zone, valves equipped with FireCheks are used effectively in other industries, both within or outside of hazard zones. FireChek thermal shutoffs are frequently used on ESD valves complying with API RP 533 Types A, B & C or similar applications and standards in other industries. They can be used on practically any pneumatically operated valve, valves with spring and diaphragm actuators, double piston rack and pinion actuators and scotch yoke actuators either double acting or spring return, either on/off or throttling. The process valves can be metal seated, fire tested or standard soft seated valves. They add safety to a wide and diverse number of process applications. FireCheks improve the reliability of triggering pneumatically operated ESD’s and EIV’s.

See article as it appeared in Valve World’s 2015 issue:
“The Pros and Cons of 3 Types of Emergency Shutdown and Emergency Isolation Valves”